I had picked these up in August of this year; shipping to my house occurred about 3 months later, after it had cooled down. Which is to say that the wine has had about 45 days of rest before I pulled the cork. This is something I rarely do, most of my new-release purchases are stored for years, some decades.

I mention this because now that I’ve had the wine, I want more of it, and in just a few months, it’s pretty much sold out (but there’s hope), and I didn’t buy enough. It’s one of the pitfalls of collecting, how much to buy – and, as is usually the case with the really good ones, enough is rarely (read: really not) enough, especially when this wine can age another 15 years+, getting better as it does.

First world problem, I know. But, and I too rarely feel this way, this wine is just brilliant, though it comes with some caveats: this is a wine for purists, for those that seek balance and structure as opposed to fruit, plus maybe some other components tossed in with it. This is a wine that’s meant to be aged, and, having had this back to the mid/late 80s on several occasions, it can get there, and it can get there in style, too.

When I first pulled the cork, and poured an ounce, the wine’s aromas and flavors were mostly mute. I immediately aerated to decanter and proceeded to make dinner. An hour later, dinner was ready, so I pulled the carafe from the cellar and poured a glass so it could warm up from cellar temp (14,5C, 58F). With a few minutes in the glass, having warmed slightly, and with some vigorous swirling, I again approached the wine and again, it was rather shut down. Nonetheless, dinner was ready, it was on the table, and I wasn’t going to go to the cellar to choose something else.

I had roughly half the bottle that first night, and I’ll admit to finding nice components, but little joy in the way I like with my aged wines. So, the remainder of the bottle was placed in 375ml bottle, re-corked and then placed into the refrigerator.

Night #2 came and went, got too busy to have a sit down dinner, and so I figured it could likely wait another night, and if it wasn’t up to that task, that I’d be able to live with the consequence.

Night #3 rolls around, and I’ve opened a 1990 Avignonesi Merlot – it too needed LOTS of air, so I poured half into a spare 375ml bottle, re-corked it, and placed it into the fridge. That’s when I saw the other bottle, the Grattamacco, from a few nights ago. Perfect, I’d pour it out and let it warm in the glass and have it after I’d enjoyed the 1990 with my dinner. But I wasn’t really prepared for the transformation of the Grattamacco – it was now stunning, exciting even; this wine has class, and lots, and lots of lovely flavors.

The exciting parts broke down, as they usually do for me, into detailed notes of place, of soil. The stunning parts can be broken down into the layers upon layers of lovely red (mostly) and black fruits, all which sit upon a stream of very fresh acidity, and fine, sweet tannins. To recap, it’s got structure, a very good sense of place, lots of flavor complexity, and it’s going to get better as it ages – pretty much all the things I look for in a wine.

That said, I’m not going to touch the next one for at least 5-6 years. If you’ve got some (or get some), and you think about opening one anytime before 2023, be sure to aerate to decanter a day or more ahead – this is rock solid, so no worries about it falling off. 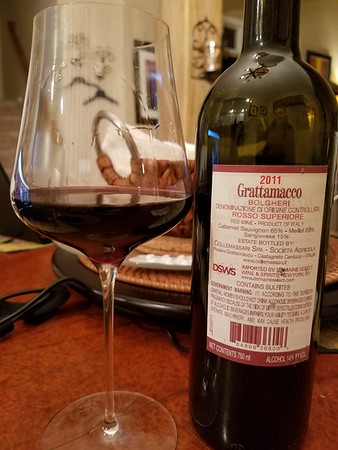 Composed of 65% Cabernet Sauvignon, 20% Merlot, and 15% Sangiovese, the wine is raised, per their website, as follows: During the harvest the grapes are carefully selected manually in the vineyards and posed in truncated cone shaped oak vats holding 700 litres, where the open fermentation is natural with soft manual punching down and a long maceration process takes place. The malolactic fermentation develops spontaneously in French oak barriques, keeping the different varieties separate. During the aging process in French oak barriques of 12 to 18 months the blends are created, following a bottle refinement of at least 6 months.

My tasting note follows (the wood is already well integrated, it’s there, but it’s also harmonious):

30 December, 2017, 2011 Grattamacco Bolgheri Superiore – “Short of any real joy on day 1 and 2, this came out, fully, on day three (fridge) at which time it was really pretty stunning. All of the elements are there on PnP, but they’re coiled, the structure too severe to offer any real pleasure. The lighter side of full-bodied, with more red than black fruits, a good sense of place, and admirable structure. The tannins will need a few more years, as will the acids, to come more into harmony with the fruits; the 14,0% abv. is already fully integrated. On day three, not expecting much but then getting pretty blown away, I was searching for more after having the remaining 1/3 of the bottle – something I rarely do, but this is the real deal. HOLD. One left that I’ll drink 2024-2034. highly recommended+ 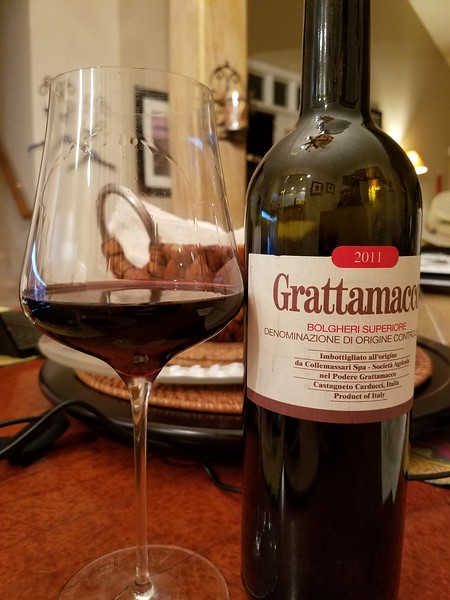