I’ve had wines from Faro (region) before, though most times have generally been at trade tastings, when the wines are young, and for the most part, diffident, and reserved.

As with many varieties, Nerello Mascalese can take many forms, some are immediately approachable, others demand to be cellared for years before they are ready. (I opened the 2004 Palari Faro just three days ago, having cellared it for ~ 9 years, it was ready).

Also, recall that many red wines of Etna region can have different proportions in the final blend (at least 80% Nerello Mascalese). One of my favorites right now, is the (~ $20)  2014 Tenuta delle Terre Nere Etna Rosso . It’s their entry-level Etna Rosso D.O.C., a wine that’s ready now, but also shows structure to age another five more years, no problem. I can’t comment on Palari‘s entry-level wine, the Palari Rosso del Soprana, as I don’t recall ever tasting it (but I will have a chance at VinItaly 2017 or when I visit the estate at the end of April). That said, I encourage you to think of Nerello Mascalese as a variety comes in a lot of different packages – just about all of them, really, really good (read: this is destined for D.O.C.G., the time is now).

(back on topic) The wines of Faro, or more specifically, the wines of Az. Agr. Palari are on a different plane than the entry-level wine mentioned above. Palari produces just three wines (whereas Terre Nere produces about five times that many, including several very fine Cru wines, with some that crest $100 USD), and all of them come from either the Faro D.O.C., one of Italy’s tiniest; it’s just 6 hectares (15 acres), or from the sandy soils of Santo Stefano Briga, on Messina’s impossibly steep coast (450m altitude).

The three wines that Palari produces are:

So, what impelled (fancy word alert!) this post? It was the 2004 Palari Faro that I opened a few nights ago, a wine I brought (as a ringer, served blind) to a dinner with my monthly tasting group – the theme was Pinot Noir. (oh, Tim, you naughty boy. Yes, I confess. I also confess that everyone at the table was in Burgundy with their guesses).

Below is my tasting note for that wine. That said, it’s not too often anymore that a wine gets (read: drills into) in my head like this one has; it’s like a really kick-ass massage, part pain, part pleasure, but 100% memorable.

“Needs air before it gets going. Light>medium brick red core, bricked to the watery and slightly tawny rim. On pop n pour, aromas of cedar/oak wood. It’s not till the wine’s been in the glass a full 20 minutes before some soil notes begin to emerge, followed by another 20 minutes before some red berry (cherry, mostly, with a brush or two of strawberry) fruit notes show up. The body is medium(-), the fruit is subdued by lots of tannins, more wood. I was thinking this was going to be a simple PnP, boy was I wrong. This is structured, for sure, but I’m not sure there’s enough fruit to allow this to reach some harmonious point with further ageing (held since release). That said, it wouldn’t surprise me too much if 10-15 years from now, with plenty of tertiary flavors and aromas, this had, in fact, become the bomb, either. The aromas are gorgeous by the 1hr mark (in the glass, with occasional swirling), but it’s clear, they’re still developing; will check on it for the next couple of hours and report back. As it is now, be sure to put this in wide-bottom decanter for at least 2 hours. At the 90 minute mark, lovely tobacco and darker soil notes with an admixture of blue and purple floral – but they are all very reticent. Long, tightly coiled finish that’s not overly rewarding, but that will likely get better with more cellar time. Delicate in many ways, austere in others. Not unlike a fine Burg, I suppose; classy, nonetheless. 13,5% abv., thru 2025″.  highly recommended (see edit/spoiler, below) 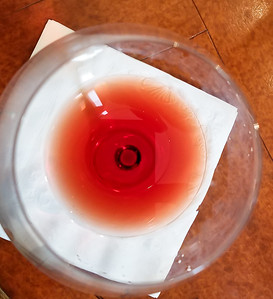 ** edit, written at the conclusion of the dinner/tasting** after 4 hours in wide-bottom decanter, I returned the wine to bottle and served it blind 2 hours later. With enough aeration, the wine had blossomed, it was now the bomb, or it least it seemed that way as others continued to remark on it throughout the night, and I too, was falling deeply in love. Having experienced the aromas in the moments after the cork was pulled, I have to say, where it ended up, 6 hours later, was a miraculous transformation. Additionally, I served this blind to my regular tasting group’s monthly dinner, the theme was Pinot Noir; it showed very well in that light.
(header photo: taken in Varigotti, Liguria, looking toward Finale)

One thought on “‘Faro’, or, ‘how I fell more deeply in love with Sicilian wines’ – Az. Agr. Palari”