My friend Valerio and I pulled into the Casa Emma estate and winery at 10am. The day was clear and cool, though one could tell that the mid-day’s warmth, when it arrived, would be spectacular, and it was, nearly 24C, not bad for 26 April (2014).

I mention Valerio because he is a native Italian man, early 30s, born in Piemonte, just to the north of Casa Emma. And although Chianti region is only 4 hours away from his home in Piemonte, he’s never once been to Chianti region. Over the years I’ve come to know that this is quite common, OK, most common. Few (ie. the minority) people get outside of their regions except to visit more touristic places like Rome, and even that is a fairly rare event. There are a lucky few that get to see a fair amount of their own country, and some even make it to places like London, and Paris, or Amsterdam, etc., but for the average Italian, the working class, it’s not very likely that they’ll be able to, given family and fiscal constraints. And to make it all the way to NYC, well, that’s just a once-in-a-lifetime for the majority that actually make it there.

This, for me, puts into perspective the simpler side of life, which I prefer, which I admire. Living in a country where I/we are bombarded, every single moment, with messages to consume, it’s a real learning experience to meet others that simply can’t, and so the messages they are no doubt bombarded with as well, have the same volume as interstellar space. I actually prefer to think they (perhaps a majority) can, if they so choose, but they elect not to make it a priority – it being more and more, never-ending, consumption, international travel, etc.

So what does any of this have to do with Casa Emma?

Dr. Bucalossi (I believe he prefers to be called Alessandro -but he’s a Dr., and I’m used referring to doctors this way – has no pretense about him, which I find says quite a lot about the man. The man is instantly likable. It’s easy to see he’s a good person. He and Marco were quick to greet us as our car pulled in to the driveway. Each one was wearing a broad and welcoming smile.

There’s a peacefulness that comes with living in the country, I think. There’s also a calmness that comes with being a farmer, knowing that things take time, and that many things are completely out of one’s control. I admire this about farmers, I’m fascinated by their fortitude and motivation despite the tragedies of hail, mildew, frost, parasites, etc., that can and often do befall them. 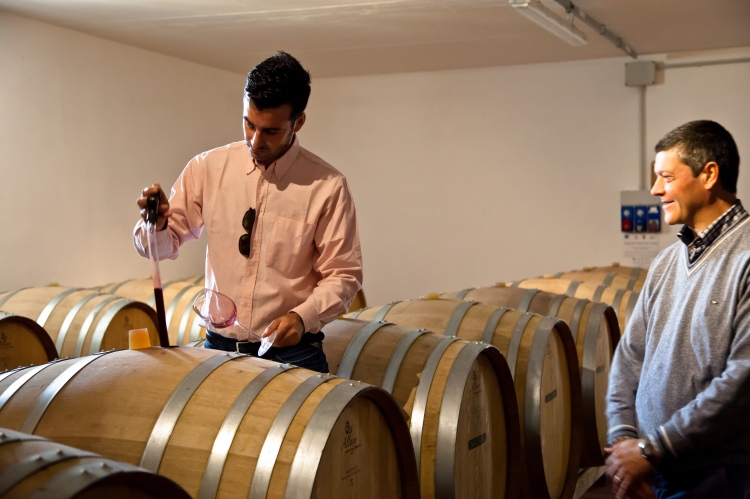 In addition to their peaceful, calming manners, there’s a subtle but very firm sense of confidence as well. Both Alessandro and Marco have considerable education, they’re both successful at what they do, and yet there’s absolutely no pretense about, well, anything with these guys.

They grow wines, they adhere to tradition, they market here and there – because it’s a competitive world – etc., but that’s about it. As I look about the vineyards, and I see the totality of the work that’s done there, all by hand, all more intensive and complete than I’ve ever seen before, it’s clear that they see their responsibilities on a more basic level – to be mindful and respectful stewards. Maybe that’s it, the steward part, maybe that’s the thing that I can’t connect with.

Where I live we are stewards of nothing. Sure, there are some (family farmers, though fewer and fewer each day), but mostly we’re just cattle that already have been or are waiting to be branded by the corporate marketing machines. And this isn’t to say that doesn’t happen in Italy or in other countries, it does, but it doesn’t happen at Casa Emma, not as it relates to their farming, anyway.

Stewards don’t cut corners for short-term gain. Ever. They know it only costs money to do so.

All of this is to say that what I saw in the vineyards of Casa Emma was, for me, emotional. Let’s compare it to going to the beach or a luxury vacation for the first time. In those examples, I think it’s pretty easy to be overwhelmed. I was overwhelmed, but it wasn’t my first time, in fact I’d visited hundreds of vineyards at this point, and seen all manner of farming – some using horses, some using machines that looked to be from some Ridley Scott sci-fi movie, quite a number doing things the old way, by hand, etc. I’d seen it all, or so I thought.

A few years later, I found a case for sale. Naturally, I bought it. I drank a lot of those bottles without taking notes  – I was a young dad, and chose to enjoy the company of my wife and young daughter instead of being an absolute killjoy at the table, i.e. not banging away on a computer instead. Below is a note from 2010, around the time I began to finish up the remnants of the case.

As you can see, I never went ga-ga over the wine, not once in all those years. But maybe that’s the real charm here, that I’m in love with it for reasons I really can’t put into words, and that my love for it comes without the need for gifts of chocolates and flowers. Either way, the wine has a hold on me, but to be clear, it’s a sub-conscious hold more than anything at this point (i.e. in 2010).

I’ll pick up here again later as I walk you through our time in the cellar, our (incredible!) lunch (from their Osteria, photos below) on the patio that overlooks the vineyards, and more tasting notes. And, I haven’t forgotten, I’ll be sure to give more details on the winegrowing at Casa Emma – what makes them unique, and what got me emotional.