I haven’t purchased many lottery tickets over the past 30 years. Maybe a few when the jackpot gets above $300 million, or something; maybe I’ve purchased twenty tickets in my life.

But, when I do buy the tickets, my mind starts to wander (and wonder!) toward the possibility of such a thing actually happening – to me. Even as I’m standing in line, waiting to buy the tickets, there’s a thrill of sorts that goes along with not knowing what’s possible.

By the time I make it up to the counter to pay for the ticket(s), there’s perhaps even another level of (greater) excitement, and so it goes – right up until the winning numbers are announced, and then it’s all pretty much forgotten, or, perhaps in the case of people that buy these either regularly and/or in great quantity, completely erased from the memory banks – as if it had never happened.

And maybe that’s the point of lottery tickets, the losing ones, anyway, that we can erase the experience, not owning up to a foolish endeavor (which, in theory, is what allows some to repeat the process, and repeat). But, if purchased on rare occasion, maybe we can justify it as cheap entertainment. In a way, a lot of folks do the same with wine, buy a bottle they doubt will be a winner, find out that was the case, and yet repeat again who knows how many times.

So what does all this have to do with wine? Well, a few of those tickets are winners, even if the amount is equal to or just slightly worth our investment. And, I think, the same is true for most people with wine purchases, at least at the lowest tiers (and maybe even above?). Most bottles are truly forgettable, a few are nice, and a few more might even be interesting (the word that’s the perfect substitute for an inability to articulate what was just consumed – I’ve always wondered, do they mean interesting good, or interesting bad? But then a (very) few more are actual winners, as in worth many multiples of the price.

I recently came across a wine that gave me more value than all of my winning lottery tickets combined; it was from a little known but very historical place (yes, that’s describing most of Italy!), the Castel del Monte DOC, established in 1971, ~ five years after the Brunello di Montalcino DOC was established. I mention this because one of those DOC (now a DOCG) has gone on to great fame, and the other, well, it’s perhaps as well-known today as it was back then – at least to the majority of wine consumers.

But all of this is not a knock on one place or another, rather it’s meant to be a celebration of my winning lottery ticket, the 1973 Rivera Castel del Monte Castel del Monte , a wine I’d acquired just a year or two ago, and one that, frankly, I knew very little about, and had little hope for (not much different than lottery tickets).

But, and this is a VERY big but, this wine was dripping with the glory of the variety (100% Aglianico, if my guess is right), and the majesty of the place; toward the northern part of Puglia – the heel of the boot, if you will. 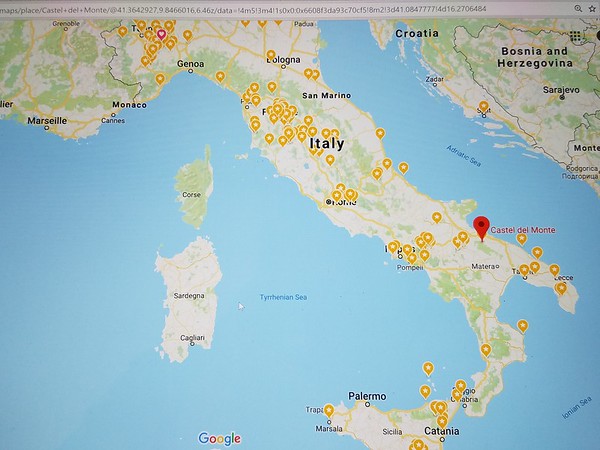 11 November, 2017 – 1973 Rivera Castel del Monte Castel del Monte  – Superb showing, exciting; guessing this was mostly/all Aglianico. Cork came out in one piece, fill was solid. But the initial enthusiasm waned a bit as the first ounce was poured to the glass – profound, dank earth aromas eclipsed any other suggestion of aroma, of pleasure. After several minutes of active swirling, I sensed some light on the other side of the tunnel, so we poured our glasses and swirled them over the next hour watching as it opened to reveal a lovely core of fruit. The off-putting aromas had completely faded by hour two, and this was all about place and variety. Tremendous freshness and structure, still, and likely to live on another 10 years, but I doubt it could improve. One of the more exciting wines I’ve had this year. Acquired at auction just over a year ago, I really had little hope at all it would be alive, let alone fantastic. A needle in a haystack. 12,5% abv., highly recommended

In addition to this lovely red wine, I’ve had a few dozen (all quite positive) experiences with their value-priced (and unoaked), and very well-grown, Rivera Chardonnay Castel del Monte Preludio No 1

Last May I drove right by them, time not allowing me an opportunity to visit. I hope to change that in 2018, either on my upcoming trip, or later toward the harvest.

In any event, I’ll certainly be stopping by Hall 11 at this year’s VinItaly, and tasting through all of their wines; it’ll be an honor to do so. The de Corato family are great ambassadors of their region, of Italia, and the winegrowing world, and if you doubt me, try their wines, it’s all right there.

In summary, and in the spirit of the New Year, I’ll endeavor to purchase (and drink!) more winners like the wines of Rivera, and less of the ones I’ll be wanting to erase from my memory.

***update: after trading a few emails with Sebastiano de Corato, I’ve found out more about this 1973 Dry Red Table Wine.

It was produced with the intention of early consumption, “Fermentation was made in open glass-lined cement vats with shorter maceration to avoid over-extracting Nero di Troia tannins and ageing in standard glass-lined cement vats. No oak ageing was involved in that wine.” The wine was thought to have a shelf life of 4-6 years, or at least this is how it was marketed.

The blend then (today’s/current bottling, which has been given a name, RUPÌCOLO, sees the addition of 10% Cabernet Sauvignon, a practice they began less than 10 years ago) was much as it is today, with the majority of the wine made from Montepulciano variety, with a lesser amount of Nero di Troia.

Which makes the experience I (and Pat Martin) had even more astounding. How this made it 45 years is a testament to the soil, grapes and care that was given way back when, and all for a wine that probably sold for $2-$3 at the time.

A really fun ride on the way back machine.