I’m currently munching on some Iberico cheese and prosciutto, and something occurs to me; in my small mind, it even seems profound. As with many profound things, it’s very simple and easily absorbed. So, in the following paragraphs, I will turn it into something not-so-simple, not-so-easily-absorbed and most likely, very boring. It’s what Pundits do, so I feel obliged. Sigh.

{warning: the following paragraphs represent some Punditry, (and largely, this message is for wineries). In other words, a lot of self-important, opinionated, thinks-he/she-knows-it-all commentary on how to make things better. Of course, not everyone’s opinion of better is the same, but since only my opinion matters, I think it’s important that you understand it. Don’t you feel better already?)

Most winery visits and tours come down to just three parts – vineyards, cellars, tasting. During the time it takes to complete a visit, say 90 minutes, a lot of information is tossed out there – soil characteristics, elevation, exposition, blah, blah, blah. Most people have probably forgotten 99% of what they just ‘learned’ before pulling out of the parking lot and heading to their next appointment. The 1% they do retain, the important part: they know what they like and what they don’t like (most of which was a belief carried in with them before the tour/tasting even began).

I do appreciate that everyone wants their story to be unique and interesting, but the storytellers should realize that in the mind of most casual consumers, it’s not likely to be. That said, I think it’s more important to form relationships based on what people like AND don’t like by helping them understand the why part of the equation. It’s key, I think, and it’s easy for the consumer to safely store that nugget of learning away for future purchase decisions; and memories, in general.

Let’s say a winemaker and/or tour guide is having a discussion about the (geologic) history of the area – complete with all sorts of mineral and soil characteristics – I have to believe this type of information is likely to be forgotten within one minute (by most/all of those under the bell-shaped curve) of the learning experience; many similar parts of these discussions/tours are just as easily, and quickly, forgotten. In my opinion, it might be better to have a more interactive education/visit – in the first two minutes of beginning a tour, tell the visitors about something they’re interested in; ask some questions, get them involved.

How many visitors enjoy wines that can be enjoyed immediately upon purchase, with inviting fruits, gentle acidity and supportive but not biting tannins? Or, this, “how about a show of hands for these that prefer wines that make powerful statements? Subtle statements? Elegant statements?

(below: the tour at Biondi-Santi) 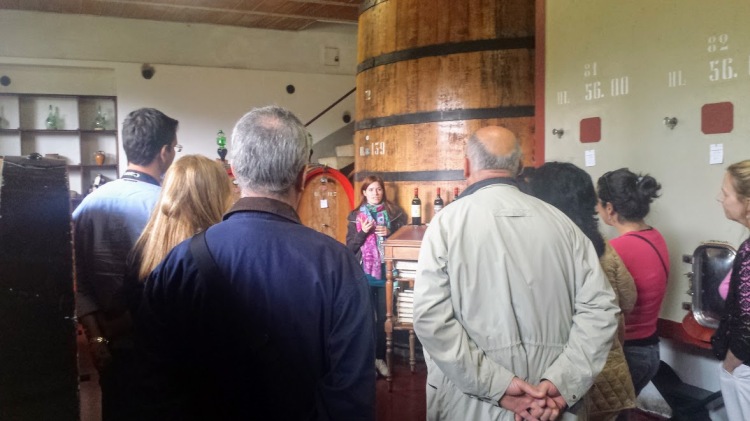 Generally speaking, most wine tour groups, I think, can be broken down into these two categories. By telling the visitors, up front, that  you’ll (i.e. the tour’s leader/lecturer) be describing wines/terroirs that appeal to each of these subsets, the customer/visitor instantly knows that something that they can relate to is going to be discussed – and after the tour – tasted. By doing this, I think, the customer/visitor has something to look forward to, something to pay actual attention to, because they know what they like and what’s important to them – already. To assume that they have something that are interested in something other than being there, maybe just to accompany some friends, etc., is to think more about one’s own needs/wants before the needs/wants of the guest(s).

I want to take a moment to clarify the word already. Yes, a good tour leader/tasting room person can turn you on to something new, and there’s a ton of value in that, but, it’s the exception, not the rule.

This is not to say a few people tasting a well grown Dolcetto (for example) for the first time won’t become fans of the grape/variety, some will, and in fact, it’s this learning experience, where the customer decides, once it’s in their mouth, that is so powerful – because it’s an experience, not a beverage. Similarly, some will hate that first experience with (enter variety/producer here), and will write it off entirely (which can be a mistake, but it’s the process I’m referring to, people’s habits, i.e. how they draw their boundaries of safe-to-include/buy, and no-way, no-how, not gonna buy this.

Look, this is just my opinion, but I’ve been around these tours/guest reception/hospitality for a long, long time, and in my opinion, it’s time to re-think them if wineries want to escape the current paradigm and move more firmly into the people (i.e. relationship business). That said, I think a lot of places already think they have made this move into the people business, but really, they’re just pushing (even further) ahead into lifestyle and aesthetics business; retention/turnover will ALWAYS be a bigger problem for such places.

Places that pour millions into marketing messages and lifestyle/building aesthetics are going after customers that are as loyal as their options. What’s better than a pretty building or nice pictures on your brochures…maybe an experience that no one can take away, one that resonates and puts a smile on a face, for decades. It’s about retention, people, it’s about customers having a genuine reason to stay with you, to listen to you, and in a world filled with more noise than ever before, this is, in my opinion, the most relevant fact. Otherwise, you’ll be no different than car dealerships, overhauling your building/facelift every five years, trying to reinvent yourself.

Pundit, out. (TWP welcomes your thoughts on making a better winery tour/visit better, so please share your thoughts if you’re up to it)

(header photo: small waves lapping at the shore on the Ligurian coast.)