It was April, 2014, and it was a rather warm (read: too warm) day inside Padiglione (pavilion) 10, home to the Piemontese wines at Vin Italy. Inside Pad 10, (see below for map of the whole place, the larger Pads/Bldgs on the map are, HUGE (no, think bigger) – and not air conditioned, and crowded as hell, etc. I digress) it’s chaos, erm, business as usual. But it’s wine, so most are happy, on one level or another. I think.

To give you some perspective, Pad.10 is so large, one could easily spend the entire day there; and probably still run out of time. So, given that Vin Italy is from Sunday- Wednesday and there are ten other Pads, together with the fact that Sunday and Monday are open to the general public as well, it’s really critical to have a firm schedule going in, with lots of preset appointments, otherwise you’re waiting in lines like everyone else, and standing. Lots and lots of standing. A few minutes in a seat, with room to move your elbows, to have a moment to think, is something of an oasis; at least to your feet it is.

Anyway, I’m getting off topic, lots has already been written about this (crazy!) fair. To get back on topic, I’ll tell you a story about another kind of oasis, the day I met the ladies that were at the stand for Antonio Vallana e Figlio, Marina and Miriam, and my invitation to visit them at their home/winery the week after the fair ended. 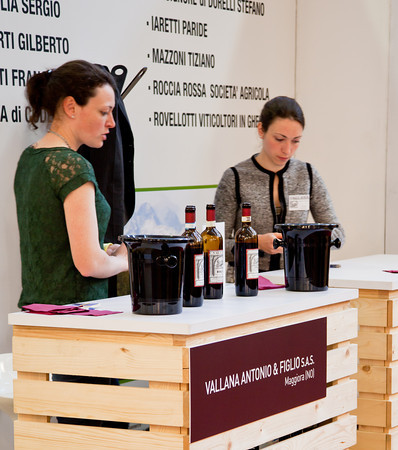 OK, invitation might be one of those writer’s license things. I asked if I could visit them, Marina checked her calendar, flipped pages back and forth, and said (at this point I’m turning blue, holding my breath), yes, I could come in a week’s time. If I was happy then, with my quasi-invitation, here I am, nearly three years later, and I’m still riding the top of that wave.

The funny thing about formulas, they can look pretty easy at first glance. There’s nothing easy about making world-class wines. It’s a never-ending, devil’s-in-the-details job. And this family is really good at their job.

The weather was on my side that Saturday morning. The drive was from my base in Asti to Alto Piemonte; the roads were clear and dry, and the temperature quite fair. I think it took just under 90 minutes. I arrived at least a half hour early, so I walked around the (tiny) village of Maggiora, home of the Vallana winery, and three generations of family as well. 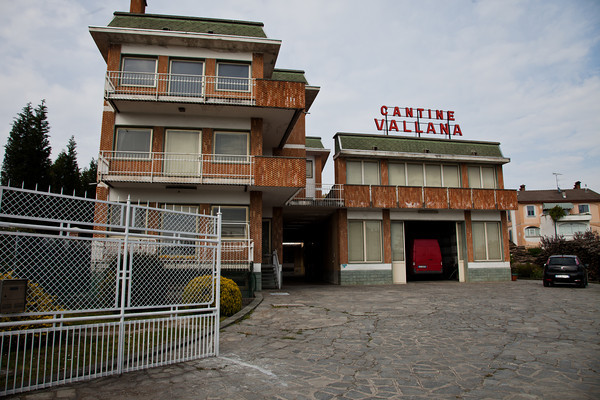 It’s quite clear to me, I’m no longer in the Province of Asti, or Cuneo, where I’ve been based for a few weeks now. The landscape has changed, there’s a rustic, nearly wild look to things. The topography is less dramatic here, a little pell-mell, at least it appears to be that way from my position(s) on the roadway.

After Marina’s shown me each of the family’s vineyards, spread across several villages, I’ll be more fit to comment on the ‘look’ of the topography. It takes most of the day, though, probably the better part of 5 hours, driving from place to place, and planting boots on the ground. (spoiler: it’s not what things look like from the vantage point of driving by in a car. Instead, it’s all about the earth, the (wait for it), the terroir).

Next up, Marina takes me to our first stop of the day, their vines/site in Boca -where I learned, first-hand, what quadretto vine training looks like (no tractors in here, it’s all done by hand, the old way), and why it’s still used, for now, but only at this one site. It’s just after 9am, the warmth of the sun is beginning to take hold, and I don’t know who’s more excited, or nervous, Marina to accurately tell the family’s story, or me to try and take it all in. Good thing I had a recorder and camera. Even still. 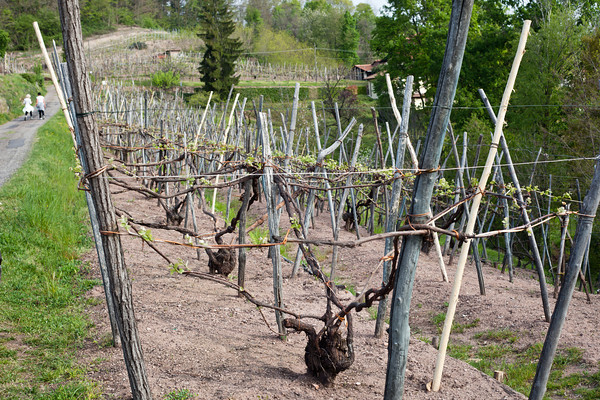 (header photo: the large sign that sits atop the winery and home to Vallana wines)