Bettina walks me through the various rooms (barrel storage/ageing, etc.), and explains the history of the building as well. Since I was a fan and student of history well before I discovered wine, and since I’ve seen pretty much every type of barrel/ageing room there is, I really just focused on her description of the building, its history.

It’s been many months since I stood in that building with Bettina, but it’s as if only a few moments have passed, as the story she told was like getting a peek back in history with that feeling that win-time is not days or weeks, it’s centuries. Or it can be, in special, historical places such as this.

As you’ll seen in some of the photos below, there’s no drywall finishing, no exposed steel structure girders, etc., rather it’s just the earthen, rock/stone construction fully exposed on the walls. As if to make the experience, and the tale, all the more real. 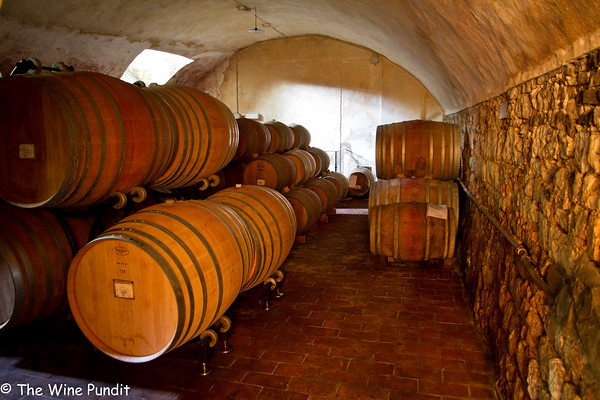 Looking at the picture(s) above, it’s what we can’t see that makes this story/visit even more interesting, more real. The building, a former monastery constructed over 1,000 years ago, has basement(s). For example, in the picture above, if you go to the end of the room and veer to your right, you’ll travel down some stone stairs. It’s hard not to notice that they type of construction from the room (above) and where we’re headed, is rather different. In other words, it’s pretty much as it’s existed for centuries with no ‘modern’ improvements made. In fact, the only real modernization is some lighting/wiring strung from the stone ceilings.

As I stand before the set of ancient stairs that lead to the basement(s), I feel the hair on the back of my neck begin to rise. Is it the change in temperature? I could be, because it seems that with each and every step down the stairs, the temperature is dropping several degrees. Or maybe it’s just the increase in humidity (literally, there’s water dripping from earthen ceilings and walls, just about everywhere)? Or is it just that I’m walking into a world that began more than 1,000 years ago – and hasn’t really changed since. Maybe it was all three of those reasons, but whatever it was, it had my full attention – this place is cool (pun kind of intended).

Standing in this barrel/ageing room, where most of the yet-to-be-released Percarlo is resting, one might imagine the wretched conditions of some medieval castle’s dungeons – filled with nothing but constant, bone-chilling cold that’s compounded by the really high humidity/dampness. Inasmuch as I’m visiting to learn about winegrowing (read: the grower’s land, what makes it unique and how are they farming it), it’s moments like this that I’m captivated by the history  of it all, and I feel like that tiny, microscopic spec/stain on history; there’s a sort of cathartic nature about it all, too.. For me, anyway.

Below, is the room (a sub, sub, sub-basement) that houses the family’s (Martini di Cigala) personal, historical treasures and artifacts. I did not choose to go down there, even though Bettina had offered it, I felt I wanted to respect not only the family’s personal space, but also this building’s/place’s greatness. So my tithe, was abstention. Plus, it was bloody damp down there, and the stone steps are slippery x3, so I figured I’d rather not try to make it down the narrow, steep, slippery steps with thousands of dollars of camera gear in tow. 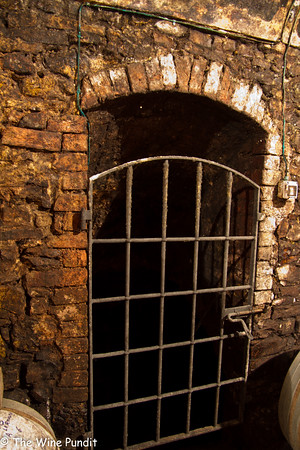 Coming up tomorrow, a sit down with Bettina, and a tasting of their wines; passing time, with special people, in a special place – it doesn’t get any better.